Experiments to resolve the conflict between Relativity and Quantum Mechanics

It appears that exactly identical radar guns can resolve a lot of science arguments.  One of the most absurd arguments made by Quantum Mechanics mathematicians is that motion can only be measured relative to some object.

That means that if you have two people inside a moving truck, the two people are stationary because there is no object moving relative to them.  It doesn't make any difference if they have a cell phone and talk with the driver who tells them what speed the truck is traveling, according to Quantum Mechanics they are stationary.

Radar guns measure the speeds of earthly objects relative to the speed of light.  In the illustration above, two men with radar guns are pointing their radar guns at each other while the truck moves at 30 mph.

Einstein's second postulate says that light is always emitted at c, regardless of the speed of the emitter.  So, both radar guns in the illustration emit photons at c.  Radar GUN-A receives photons from GUN-B at c+v because Gun-A is moving toward those oncoming photons.  Radar GUN-B receives photons from GUN-A at c-v because GUN-B is moving away from the oncoming photons. 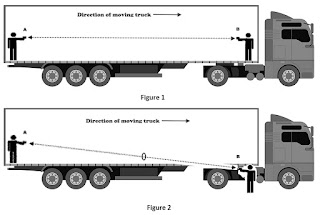