I've used Google Maps' Street View to look around my home town, around Washington DC, and around Chicago its suburbs, and for awhile I assumed that Google just ran it's camera car up and down streets of the USA. Then, about 6 months ago, I wondered if I could use it to locate where a Rational Science Methodist conference was held in a small town in Scotland.  Since I knew the address, I quickly discovered the "conference" was held in this pub: 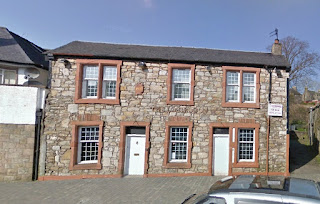 I spent hours touring Dalmellington, Scotland, via Street View.  Then, when I was done, I never thought about touring any other location -- until yesterday.

Yesterday, I wondered what Misawa, Japan, looks like today.  When I was there from mid-1963 to mid-1965 I took hundreds of photographs.  I also wondered if Google Street View had ever been to such a remote place.

So, I used Google Maps to locate Misawa and then picked what looked like the main street to see (via Street View) what it looked like today.  It didn't look anything like what I remembered.  Nothing in the town looked anything like what I remembered. Then I realized I needed to find some reference point to make sure I knew where I was.  The only reference point that I was certain was in the same place today as it was 53 years ago was the main gate to Misawa Air Force Base.  Here is what it looked like in the winter of 1963 or 1964 (you can click on the images to view larger versions): 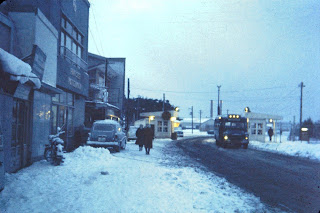 Here's what is looked like in September 2015, when Google's street view camera car passed by: 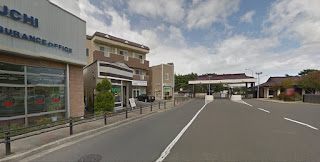 At some point in time, probably in 1964, they added a sign over the main gate: 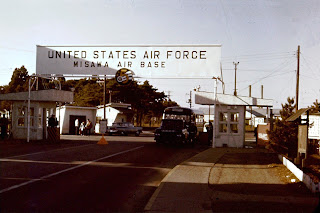 These days, the sign seems to be stone or concrete, and it's located on a grassy area outside the gate: 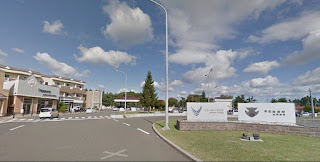 Using the main gate as a starting point, I was able to locate the main street which looked like this in 1964 when the Emperor drove through on his way to his plane at the air base: 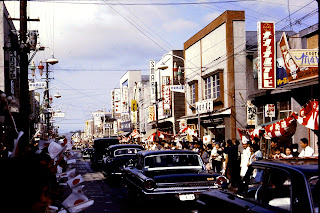 And here is what that approximate same point looks like today: 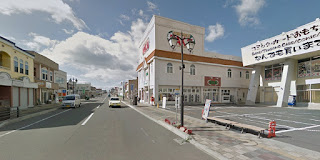 A big part of the change was undoubtedly the need to replace flammable wood structures with concrete block buildings.  I remember one major fire while I was there that burned down several side-by-side businesses.   But, they must have razed virtually every building on both sides of the main drag to widen the street and transform in into what it looks like today.  And they must have done the same thing to most of the rest of the town.

(Several days after writing the paragraph above, I found the explanation for how they were able to widen the main street.   The whole center of Misawa burned down in January 1966.  Click HERE to visit a web site with 75 photos related to the fire.)

Back in the 1960s, there was an alley less than a hundred feet from the Air Base main gate.  That alley (now a side street) was lined with a string of at least a dozen bars, restaurants and pawn shops side by side.  Back in the 1960s, it was called Nakashio Koji, which translated to "the small street next to the Nakashio department store."  It was the only street I knew by name.

I never took a picture of the entrance to Nakashio Koji while I was there, but today it is a narrow side street.  Here's a current picture showing how close it was and is to the main gate:

The side street makes a bend to the left behind the first building on the left.  Here's a picture I took of the area just beyond the bend when I was there: 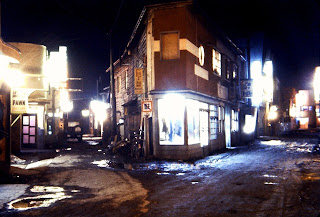 Here's what it looked like to Google's camera car in 2015: 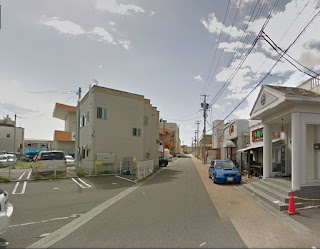 The street still seems to have several bars and restaurants, but there's now one or two businesses occupying the same amount of space where there used to be a jumble of four or five bars.

After using Google street view to tour Misawa for a few hours, I tried finding some places in England to see what they look like today compared to the 1990's when was last there.  They don't look all that much different.   For example, here's a shot I took at an intersection in London at least 20 years ago: 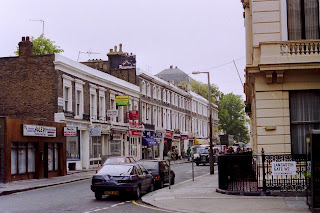 The name of the street is clearly visible on the sign at the lower right corner of the picture, so I was able to easily locate it as it looks today: 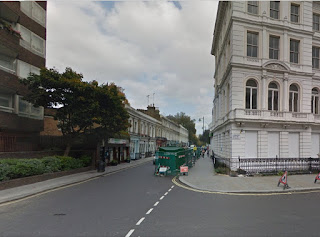 The street sign is no longer on the fence, it's now on the corner of the building.  The ground floor windows of that building seem to now be bricked over.  And there seem to be fewer signs on the buildings down the street, but the Halepi Greek Restaurant is still there, just with a new paint job.  And the hospital a few doors down now seems to occupy additional space that was previously occupied by two other businesses, but generally things look about the same.

Then I tried Las Vegas, which I know is very different today compared to what it looked like when I last visited it.

Here's a photo I took of the Stratosphere Tower when it was under construction: 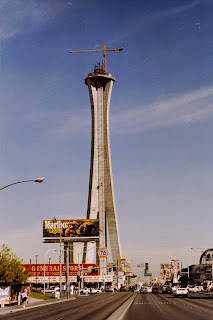 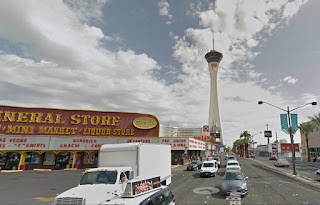 Except for completing the construction, this particular view isn't all the different today.  The "General Store" is still there and looks virtually unchanged.  The biggest difference is that I used a standard camera lens and Google uses a wide-angle lens, which makes the "General Store" look a lot farther away from the tower than it really is.

Construction on the tower began in February 1992, so the photos show only 24 years of change.

I'm constantly amazed by the things that can be done on the Internet, and viewing previously visited locations is one of the more amazing things.