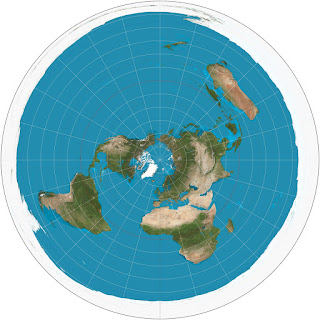 I was surprised to see on the news a couple months ago that a conference of people who believe the earth is flat was held in Raleigh, North Carolina, on Nov. 9-10, 2017.  It was a sold-out event, with about 400 people attending.  The image above is the shape of the earth as most of them see it.  The white band around the edge is the "ice wall" (known to everyone else as "Antarctica") that keeps people and the oceans from falling over the edge.

A little more research turned up news stories about the Flat Earth Conference.  Examples: "Inside the first ever 'Flat Earth conference' where conspiracy theorists promise to 'reveal Nasa space lies' and prove our planet isn't spherical," "Fanatics descend on sell out 'Flat Earth' conference promising to 'reveal NASA space lies'," "GLOBE NOTTERS: These oddballs are convinced the Earth is FLAT … and they’re out to ‘prove’ their theories are true," "Sellout flat-earth conference discusses NASA lies, fictional 9/11 and government mind control."

I also found that there are many web sites run by Flat Earthers, and they also have many YouTube videos where they explain their beliefs.  One Flat Earther, Eric Dubay, has a 35 page "book" in which he presents "200 Proofs Earth is Not a Spinning Ball."  Four of his more interesting "proofs" are #44, #46, #47 and #48.   Here they are:


44) If Earth was a ball, and Antarctica was too cold to fly over, the only logical way to fly from Sydney to Santiago would be a straight shot over the Pacific staying in the Southern hemisphere the entire way. Re-fueling could be done in New Zealand or other Southern hemisphere destinations along the way if absolutely necessary. In actual fact, however, Santiago-Sydney flights go into the Northern hemisphere making stop-overs at LAX and other North American airports before continuing back down to the Southern hemisphere. Such ridiculously wayward detours make no sense on the globe but make perfect sense and form nearly straight lines when shown on a flat Earth map.

46) On a ball-Earth Cape Town, South Africa to Buenos Aries, Argentina should be a straight shot over the Atlantic following the same line of latitude across, but instead every flight goes to connecting locations in the Northern hemisphere first, stopping over anywhere from London to Turkey to Dubai. Once again these make absolutely no sense on the globe but are completely understandable options when mapped on a flat Earth.

47) On a ball-Earth Johannesburg, South Africa to Sao Paolo, Brazil should be a quick straight shot along the 25th Southern latitude, but instead nearly every flight makes a re-fueling stop at the 50th degree North latitude in London first! The only reason such a ridiculous stop-over works in reality is because the Earth is flat.

48) On a ball-Earth Santiago, Chile to Johannesburg, South Africa should be an easy flight all taking place below the Tropic of Capricorn in the Southern hemisphere, yet every listed flight makes a curious re-fueling stop in Senegal near the Tropic of Cancer in the North hemisphere first! When mapped on a flat Earth the reason why is clear to see, however, Senegal is actually directly in a straight-line path half-way between the two.

They are all basically both the same argument.  They just use different locations.  I found a graphic that some Flat Earthers use to illustrate this argument.  Here it is: 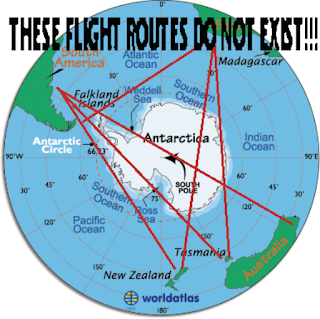 Note that the routes were clearly chosen so that they would cross Antarctica, and they ignore shorter, actual airline routes that go to and from the places depicted and do not require flying over Antarctica.  Moreover, the route they show from San Paolo, Brazil, to Perth, Australia, which goes closest to the South Pole, would be a 9,240 mile trip, and the range of a Boeing 747-400 is just 8,380 miles.

I did a little research and found that, contrary to the claims in the illustration and in the "proofs," anyone who has the money can fly around the earth (and around Antarctica) on commercial flights.  And it can be done on just 4 hops:

On a projected map with the South Pole in the center, the 4 hops look like this: 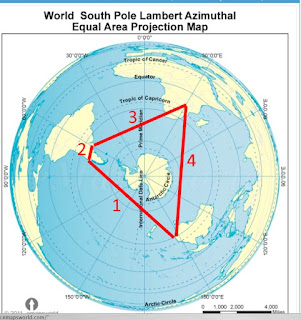 On the Flat Earth map, however, the 4 hops look like this: 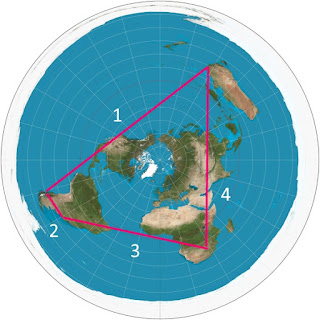 And, of course, when flying on the flat earth from Johannesburg to Sydney, you would fly over Saudi Arabia and China.  On a globe, the flight is mostly over the Indian Ocean.

The question then becomes: When people take these flat earth flights, how is it they do not notice that they are flying over land when they should be flying over the ocean?  And how do they make it in one hop if the distance is greater than the distance the plane can fly without refueling?   Do the Flat Earthers believe all the passengers are hypnotized or drugged as soon as they get aboard?

Or maybe the Flat Earthers are just incapable of understanding simple logic.
Posted by Ed Lake at 2:05 PM