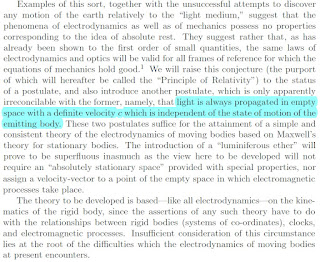 light is always propagated in empty space with a definite velocity c which is independent of the state of motion of the emitting body. 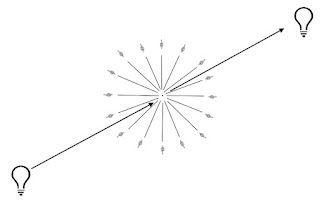 In the illustration above, a light emitter is moving from the lower left to the upper right. At the midway point, it emits an instantaneous burst of photons in all directions. Photons traveling back toward the lower left travel at the same speed as photons traveling toward the upper right. In fact, Einstein says that the photons spread out in a “spherical wave.” It is shown as a circle in the 2-Dimensional illustration, but in 3-Dimensional reality there would be photons traveling at 299,792,458 meters per second in all directions.

What this implies is that, while the emitter (the stars) move, the point of emission in space does not.

Einstein seemed to understand that when he wrote that his theory made the “luminiferous ether” superfluous. If all light is emitted from stationary points in empty space, what need is there for some imaginary “ether” to measure movement against?

It wasn’t long before someone named “Mikko” posted some comments about what I had written. His comments showed he didn’t understand what I was saying, and I wrote a response trying to explain things to him. But, for some reason, the administrator of that site deleted my response. So, I’m going to write my responses here.

I fully accept Relativity! Relativity is about how two different observers can see different things due to Time Dilation or the speed of light. My article has NOTHING to do with relativity. It is ONLY about Einstein’s Second Postulate and how light is created and travels.

Mikko then stated that there were no “facts” to support my claim that there are “stationary points in space.”

My response: If light travels in a straight line in all directions away from where the light is emitted, doesn’t that indicate that the light comes from a stationary point in space? The emitter moves on, but the point of origin for the light remains at a specific location. We can determine where that point is by tracing the light back in a straight line until it hits an OBJECT that was on that line at some time in the past. That object MUST be the emitter, otherwise light would have to pass through it.

Mikko then argued that, although I state that the point where an atom emits a photon will not be where the atom will be NOW, but does not say where it will be instead.

My response: Where the atom is NOW is irrelevant. It all depends upon the speed at which the atom is moving. The only fact of importance is where the atom WAS when it emitted the photons that traveled in a straight line to our telescope.

In his second comment, Mikko wrote a rambling diatribe about how I failed to explain that more light will be emitted in the direction the emitter is traveling and less in the opposite direction.

My response was that his comment has nothing to do with the subject “Stationary Points in Space.” And it is WRONG! In the illustration I posted above, the same amount of light is emitted in all directions. For any star, it should be the same. But if photons are emitted constantly, the photons will be CLOSER TOGETHER in front of the emitter. THAT will make the light seem brighter if the emitter is coming toward you. The illustration below shows how light is brighter in front of a moving light source because the photons are closer together there.

Mikko next wrote that I also didn’t mention that the frequency of the light is different in different directions: bluer in front of the source, redder behind.”

My response: That is because it is NOT. I explained why in the paper.

I created this discussion thread because discussions were not allowed on other forums I had tried.